A group of what some folks are referring to as Wokes took down the statue of Gassy Jack in Vancouver’s Gastown yesterday. And while I absolutely stand behind and share, their outrage at the reasons behind his fall from positive to not-so-aggrandizing notoriety, he ‘married,’ think about that, a 12 year old Squamish Nation child, and went on to father his own child with her. In other words, he was given legal permission to rape a 12 year old girl.

I clearly see how leaving his statue up comes off as condoning his (and others’) heinous acts of child-rape, legally condoned by every system and individual who co-signed it, but I fail to see how this particular action serves to remedy anything over the longer term, and isn’t that what we really want? To air the dirty laundry of history while working toward not repeating it?

I find (and some of the comments support this train of thought) that this kind of action, while very gratifying in the moment, is divisive and inflammatory, and isn’t that what we’re trying to steer away from?

Would it have been more useful to erect a statue of her beside him, and a plague, articulating the actual history? You know, owning the colonial and paternalistic crimes committed against her and mega thousands of others, taking responsibility, acknowledging her and by direct extension her people and the suffering they endured?

Just a thought or two…

Relevant Tyee article by Jen St. Denis is here, the photo is also hers: 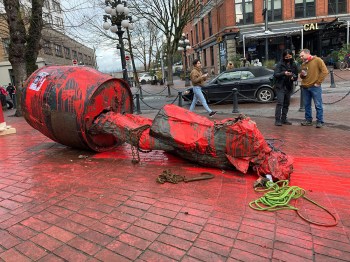 2 thoughts on “Was there a different, more unifying solution?”