Even this- watery place, loved and trusted, denies me solace…
…betrays- this beleaguered soul.

New- this anguish, and frighteningly familiar…
…tables turn- this crisis, is mine.

Bereft- until the next incarnation… only…
…until then.

Posted by ~MyLa | Filed under Poetry 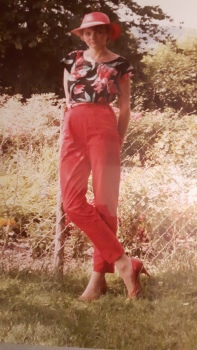 I want to tell you this story. I have told you the untold story of my original dad, the hero status I raised him to, because most of us do, when folks die young, tragically, dramatically. And because his heroism was brash, in your face, and because we as a culture have this bizarre tendency to idolize the dead, forget their misdeeds, while we ignore the living, breathing heroes who walk among us, every single day. My mother is one of those silent heroes.

It is far less cumbersome to paint a balanced portrait of a dead hero than a live one. For a dead hero cannot take offense, be hurt by, feel misunderstood, when I shed light on the dark side of their humanity, or my experience of it. The telling of these truths as I know them, shining light on all of our human parts, is a significant piece of the indescribable thing which drives me to write anything, about anything, in the first place. It is about normalizing humanity again, in all of its glory and folly. It is about refusing to buy into culturally-boxed ideas of what is real, what is appropriate, what is worthwhile, who and sadly what, we ought to idolize.

My mama Marcella is a Warrior Woman. One of a much subtler ilk and variety than the outwardly visible, unfiltered rebel-rebel style I inherited from our mutual hero, my original dad. She has known more strife and hardship, worked harder in her life, waded through more shit than you and I combined have ever flushed. She has trudged up more hills, bled herself dry for my dad, for my step-dad, for my brother and I, our children, and so many others, more times than I have the mathematical skillset to count.

She grew up in war-torn Eastern Europe with a mal-adjusted, alcohol-loving, violence-inclined father. When my grandmother finally managed to get them the hell out of his reach, with nowhere to go and no-how to get there, she learned by the same quietly tenacious example of her mama, Žofie Ševčíková, that I have experienced and learned from her, my mama Marcella, with two L’s.

When my babi Ševčíková forbid her to date my über unruly, leather clad, motor bike riding, womanizing, Czech Casanova of a dad, she up and married that boy, with my big brother Tom already in her womb. Keep in mind that this was 1960 in Eastern Europe, and nothing about him or their love story, was ‘appropriate’ or ‘acceptable,’ but especially not in my very strict and proper grandmother’s world view, and the hopes and vision she had for her only child.

When my dad was up against an extended jail term (for various political and other rebellions) she lessened that term by several years, doing what a good, loyal wife would do and made sure the authorities did not find everything they were looking for; she shoveled coal in our basement for days, to ‘obscure’ the immediate visual existence of various artifacts of interest to them.

When the Soviets rolled their tanks into our lives on that notoriously famous day in 1968, she quietly went about the business of being my dad’s right hand, in the complex affair of ‘getting him out of jail,’ think about that, and all of us out of the country. She literally bled her hands dry when she went to work with him in a metal toy factory in Germany while we were in hiding, because they were looking for him. She did it again when we finally got to this country, working at night producing and repairing the massive anchor lines used in the Port of Vancouver.

When he died two years later in a mysterious mining ‘accident’ in Stewart BC, she found herself standing in a world completely unknown to her, with two kids under the age of 12, no language, no job, no money, and no family support to speak of. We had fled former Czechoslovakia ‘illegally’ and going back was not an option. So like the Warrior Woman she is, she chose to put down his rifle the day they came to tell us he was dead, she chose to stay alive, and make the life for me and my brother that he always dreamed of, for all of us. I don’t think she ever thought of it as making a life for herself and her children, it was always about making sure my brother and I had what we needed, and then some. She slaved at several jobs to give us what our two-parent Canadian friends had, and so much more, always. This has never changed.

When we first landed in Canada I felt completely alien and in an effort to fit in, decided to change the spelling of our shared first name, Marcela, to Marcella with two L’s. My 1st grade friend Michelle had two, and I thought if I did, I would be more like her. My mama agreed because she needed her daughter to be happy. When I started to figure out who I really was in my mid-thirties, I changed it back to Marcela with one L, announced it to her, and the woman who hates profanity said ‘fuck you,’ I’m not changing it again. I’m keeping two.’ Insert that accent we all love so much and boom, you know where my feisty comes from. She may be a silent hero, but she ain’t no pushover!

When a millionaire wanna-be-hobby-pimp turned me out and she heard what I was doing for a living, she combed the known strolls in Vancouver looking for me in the middle of the night, and when I started to pump my veins full of poison to kill the pain of inhuman judgement, she never did, judge. She just wanted me to stay alive. When my brother wanted to get married at 18 and needed her signature, she may not have liked it, but she signed, because she wanted to support her son.

When she finally made the decision to pursue a life of her own again and married my second dad Mickey, there was not a moment’s hesitation, when I asked to follow her to Switzerland less than a year after she had moved to be with him.  I needed to escape a life I was seriously unprepared for and she needed her daughter to be safe. Naturally she took me in, right into the middle of her new marriage and life. I was so happy for her. It was so short-lived.

You should know that we both cared deeply for him. He was lovely. That phrase is a standing joke between her and I, because in actuality he carried decades of anger and negativity that had nothing to do with my mother or our family, and she was where he directed it, more often than anywhere else, because he knew she would suffer in silence. In the beginning, for the first 20 years, she defended him almost as fiercely as she had defended the folly of her one true love, my original dad. Later, during moments of profound unhappiness and intense vulnerability, she talked about her sadness, but like so many of our species, was afraid of ending up alone in her old age.

So she stayed, stoically, in what I believe was a deeply unhappy union for both of them, for over 3 decades, until he died in 2012. She cared for him for months, brought a hospital bed into their living room. She slept on the couch so he wouldn’t be alone in his illness and fear and anger. We spent a week together sleeping on the floor of his hospice room, so he wouldn’t be alone and afraid and angry when he died. I learned something from her during his illness and ultimate passing, which almost defies description. I believe it is connected to human dignity, in profoundly undignified moments, and complete and utter un-conditionality and commitment.

This very generosity, loyalty and dedication to the well-being of her children and others, continues to be one of her greatest strengths and pitfalls, all in one. I recognize this characteristic well, because I, her youngest apple, have not fallen far from, am still clinging fiercely to parts of her tree. I share her tendency to stay loyal to individuals, organizations even, that by virtue of their less than stellar behaviour toward her or I, have rendered themselves undeserving of said loyalty.

Giving undeserved loyalty is my mother’s Achilles heel.  I have learned from her about getting out of really bad situations sooner than later, and I am beyond sad that I had to learn it by the heart-wrenching example of her prolonged suffering.

Máma, I know that my deep sense of empathy, compassion, and to some extent a sense of obligation to others, come from you. I love you so far beyond these few paragraphs, for they are but a mere snapshot into a life most folks would be challenged to imagine, never mind survive and thrive in. I feel that you cannot possibly comprehend the extent to which you have informed some of the best parts of who I am; they are not the outwardly intense and obvious bits I get from my rebel-rebel father, they are the stoic, silent inside that I so often feel is going to break me, but I know is part of the core, the very root system of that apple tree I come from. For you have always been the roots that keep our family tree healthy and strong, and bearing crazy-ass Ševčík-Mrnka-fruit that defies anything like normal, when it comes to categories.

This story is a work in progress. The task of attempting to portray your heroism is one of proportions most epic, and I am overwhelmed with anxiety about getting it right. There are so many more parts, so many more pages in the story of your life that I feel must be included, but it is important that I release this draft from the vault of my beloved writing lappy, before I am paralyzed with the enormity of painting an accurate word picture, of your beautiful soul. The figurative ‘stick people’ I have managed to draw on this page, will have to do, for your 81st birthday, my dearest máma.

I have faith that we will both continue to flex that never-give-up-muscle we have in common, and while another 81 for either of us is a bit of stretch, I choose to believe that we will enjoy many more years of life, love, learning and growing old(er) together.

More filtered than usual, for I know you hate it when I swear, and with all the love I have:

PS: Thanks for the style, we do love our hats and clothes and shoes’n things!