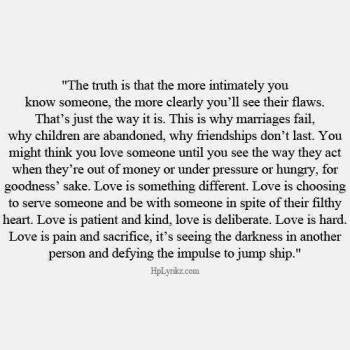 Thinking out loud, December 22, 2013:
I was just going through some ‘thinking out loud’ writing, looking for something else entirely, and came across some thoughts from this past summer. I wrote it (for me) after a significant falling out with a former love(?), and his comments about all the women in his past giving up on him, most specifically, his wife. The one he has been legally separated from for over 10 years, but would not divorce. He lied to me about moving forward with that, because it would mean there was nothing (legal) holding him back from a real commitment to me, to our relationship:

July 02, 2013
“Love, the word, the feeling, the emotion is not all of it, it is not enough, it requires work, effort, sacrifice, seeing, feeling the darkness in another and loving them not despite it, but because of it… walking the talk of commitment… she gave up on you because you gave up on her (lying), and when you did it again and again… not to do so, would have been giving up on herself… have I given up on myself (again), because I continue to be the (only) one to talk, to love enough to fight for this relationship and what’s important, to talk about, change, walk through the hard shit?”

Truthfully? I started to lose huge parts of me, I needed to get out, then, at the latest, July was not the first time he lied to me, led me by the nose, was abusive in the most hurtful, manipulative, sneaky and passive-aggressive ways (my beautiful, insightful son  calls it ‘greasy’), blamed me, constantly, for everything that was attached to his own behaviour and lashing-out responses to anything real… I met him in January 2012, started seeing him early April that year, he lied to me the first time on April 19th, the second time in May, then the manipulation and blame started, there were huge issues in June, July, August and September… a ‘fluffy-phase’ in October and part of November, and then it continued, in the guise of love, and I moved in with him in May 2013… he was good, at the ‘talk’ part of ‘love?’ and most importantly, I bought in, because 1) I loved him for real, not because I didn’t see the dark, but because I know my own, and understand how we get there, how to move beyond it to the light, to turn love into real intimacy, into real attachment, real commitment, how to love with everything… I thought he would too… I saw the potential… and 2) I wanted what I wanted, I wanted to be in love, and I lost so many parts of me again, I went backwards, to believing old stories, that no-one else would/could love me… truth is, he never did…

I have counselled for years, social-worked many and developed/taught life-skills programs that included these brilliant insights: “…we cannot be in love with another’s potential, for it is their current place of being, that informs how they treat us in the here and now… … love and abuse cannot exist in the same environment, they nullify one another…”

Take my advice, plenty to give, because I’m not (wasn’t) using it . Don’t get me wrong, please, this is neither an exercise in Marcela-beating-on-Marcela, nor is it one in blaming, beating on him, never really went there once we were done-done a number of months ago… it is an exercise in reflection, and a note to self about this evenings ‘next’ date. A thinking-out-loud moment about what love is, in all of its incarnations… the thing I intended to write about today in the first place:

About my focus for 2014: Focus on the ‘do’ of what I want to do as opposed to ‘not doing,’ what harms me… focus on the ‘start’ of doing as opposed to the ‘stop’ of what harms me… focus on the Love and Light that lives inside me, in massive abundance, as opposed to the distractions of darkness and hate. I already know what harms me, and you, I know what is terribly wrong in the world, and terribly wrong with us, as a culture, as a species… Focus, on Love and Light, mine, and yours. And when, my reality, the truth about who I am, 100% unfiltered and pure Marcela, blows up your fantasy of who you thought I was, who and what you want me to be, mosey on Buckaroo, Buckarette, I’m good with me, fully, and in totality… finally, 52.5 years in.